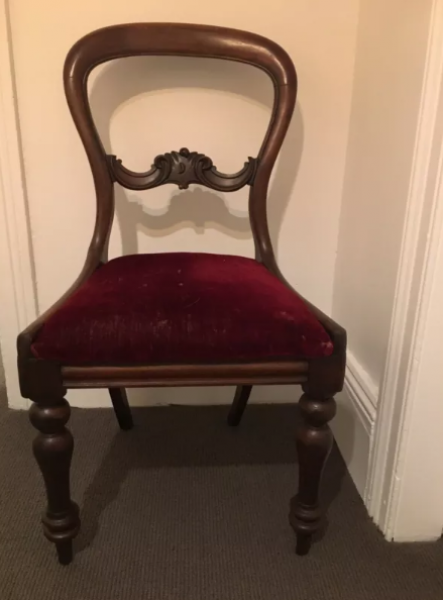 MAKE AN OFFER! Genuine antiques at least 160 years old.
This is about as original as it gets. You can see from the patina that they are genuine Antiques. For Sale a set of 6 Antique Colonial dining chairs. They have the same detail to the seat as the rail backs of the early 1800’s -1830’s with the seat being a separate lift out however would have been the first of the balloon backs. My guess is 1850’s. The seats have all the original horse hair padding however the jute webbing has deteriorated due to age and snapped so both the seat frame and webbing needs to be re done. I have all the original hardwood timber but the joints are old and need re doweling however with the number of tack holes from previous times reupholstering it would make more sense to just make up new ones. I have purchased 16metres of 4 line wool and elastic webbing to repair them. I have bought 10 metres of very expensive navy blue high quality upholstery at $130 a metre and had planned to reupholster however I need to make space and sell. The upholstery can be purchased separate if wanted. The red velvet looks to be about 1890’s but there has been previous repair reupholstering so I don’t think they are original. Now that I’m selling it, I will leave it as it is original because there is definitely an appreciation for pieces that are a complete example of the past and if someone wants to re use the red velvet they can. Pick up only from Hunters Hill Sydney NSW 2110. Contact Tim on zero four 35 one six 9 817